Drive-up the score and the leaderboard. Learn how to play and steadily become the next Kobe Bryant on the virtual court. 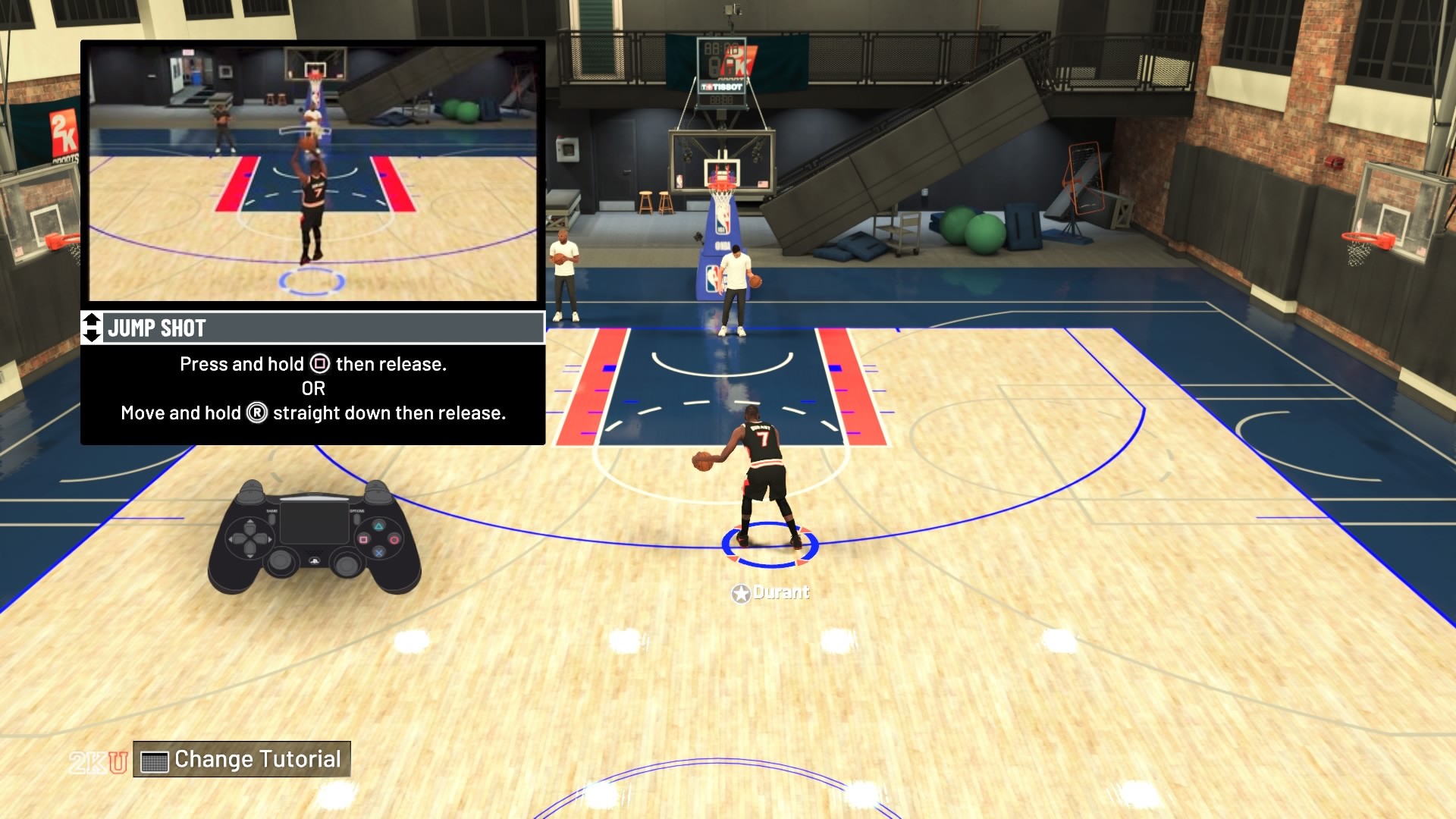 Press and Hold Square then release OR move and hold the Right Stick straight down then release.

Learn how to properly time the shot based on the meter or player’s jump. A tiny meter appears when you hold the stick/button. A small marker moves from the left to right across the meter. Release the button or stick at the apex of your jump, which is the exact time the marker reaches the middle of the light area toward the end of the meter to make it rain. 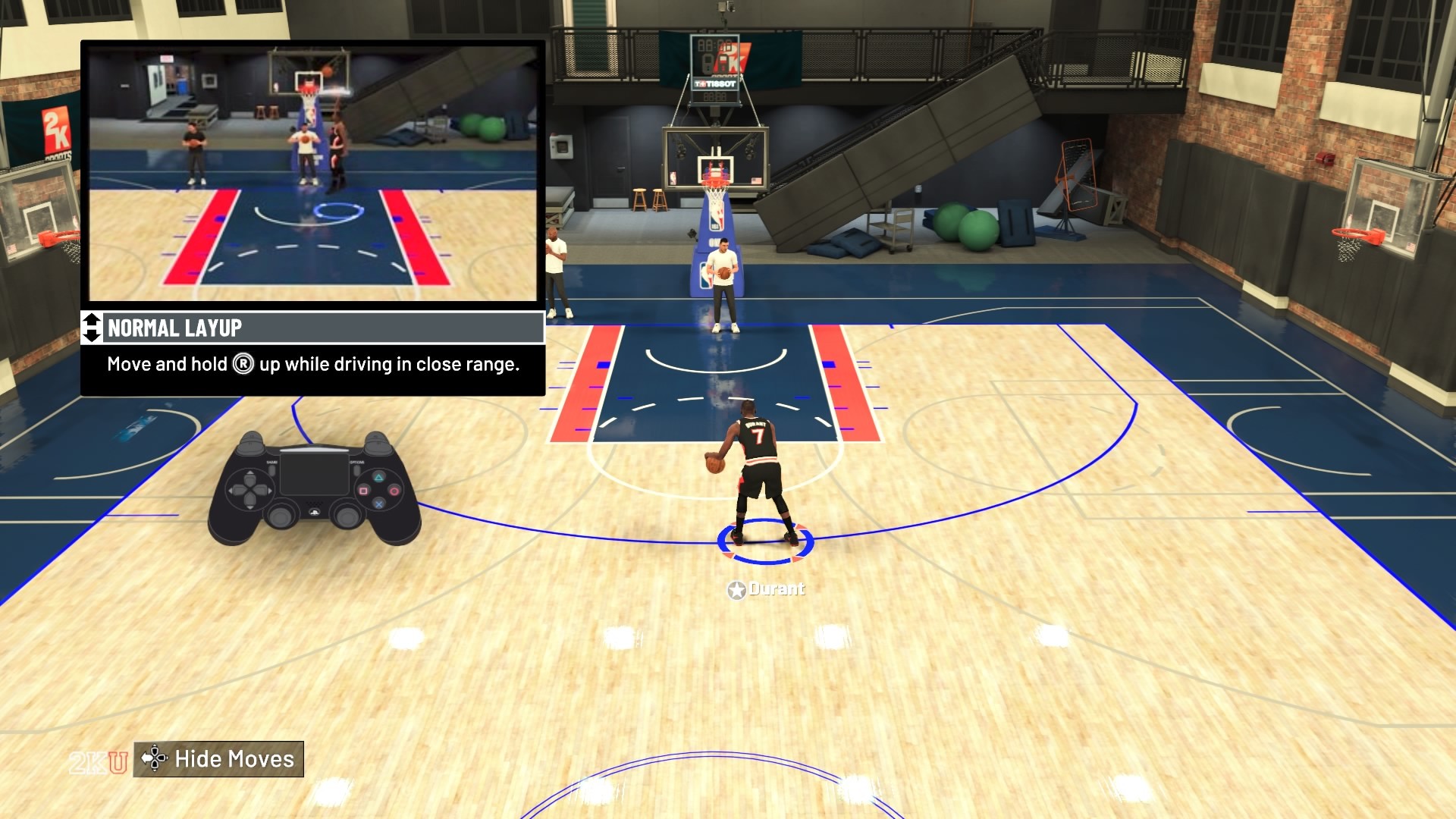 Move and hold the Right Stick up while driving in close range.

Finishing in the paint is the same as shotting with the Right Stick, except you only push it forward. A straight push is all you need. There aren’t any ridges in the PS4 controller to lock the stick’s position in the narrow perfect center (green) release window. Fortunately, most of the slightly left or right releases will sink into the basket. Get a feel for the right release in 2KU, the game’s practice, training, or tutorial mode. 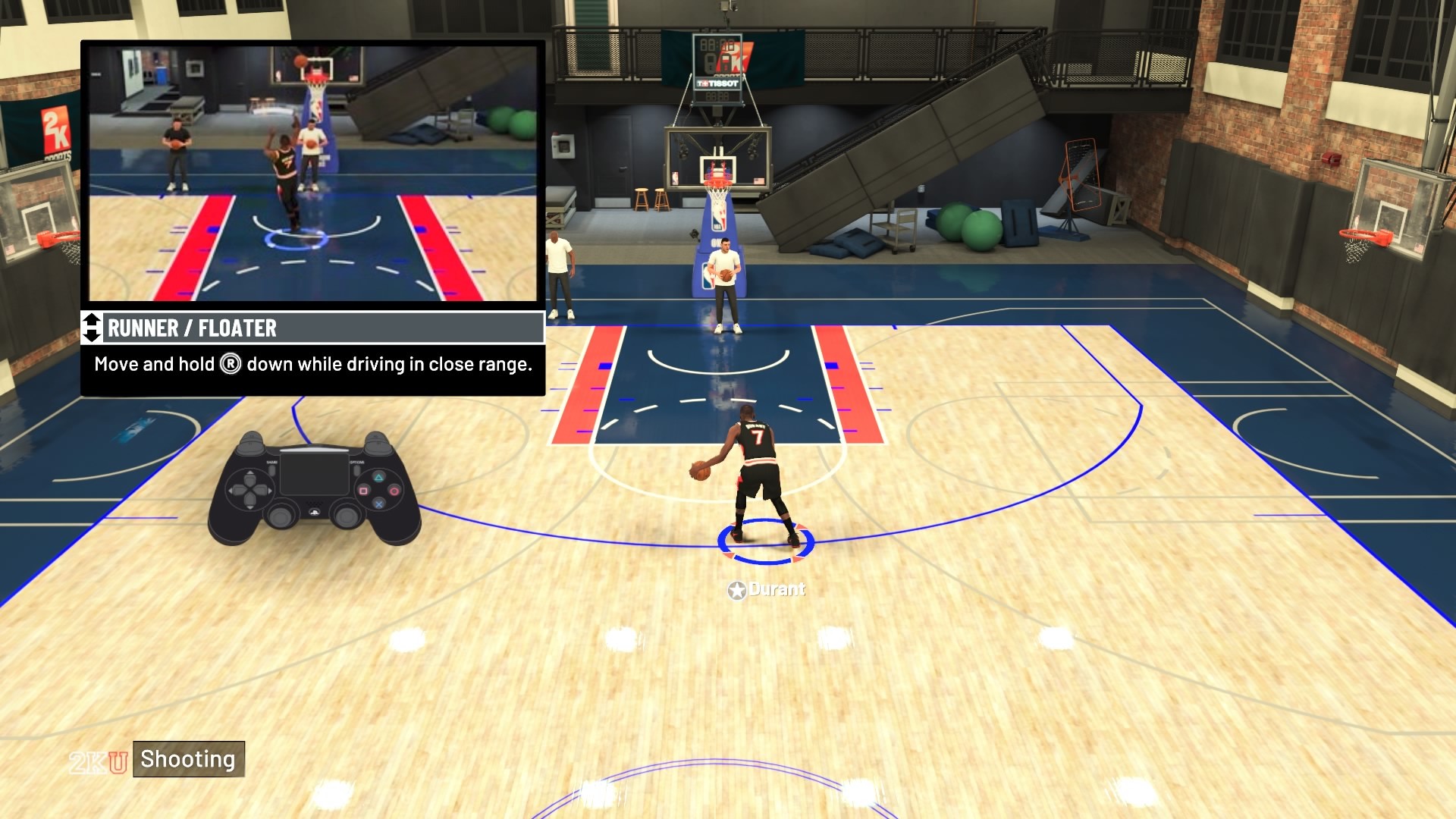 Move and hold Right Stick down while driving in close range

Runners/Floaters function the same way as normal layups. However, you pull the right stick backward instead of pushing it forward. The same tips apply. Pull the stick as straight back as you can to increase your shooting percentage. 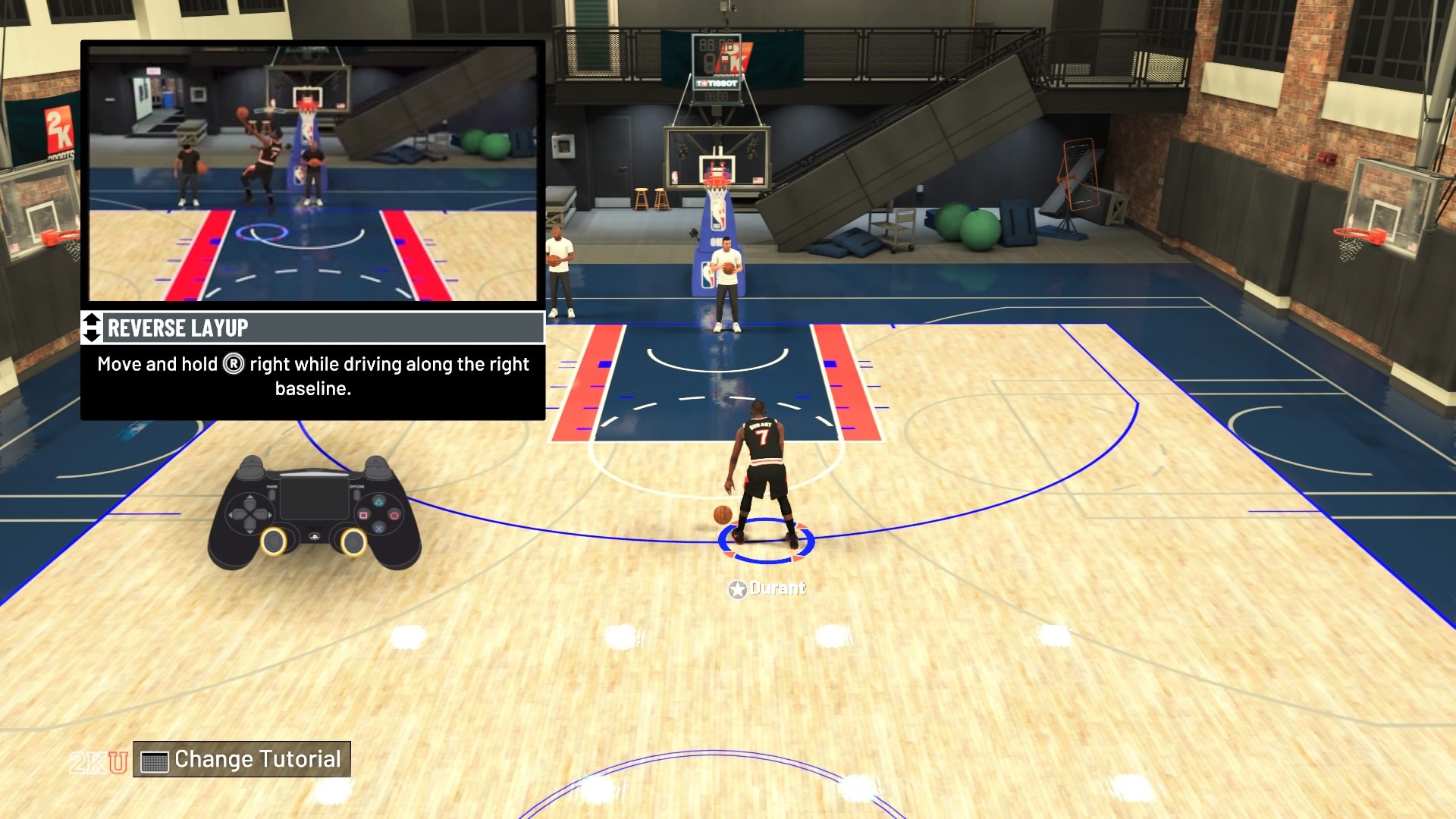 Move and hold Right Stick right while driving along the right baseline. 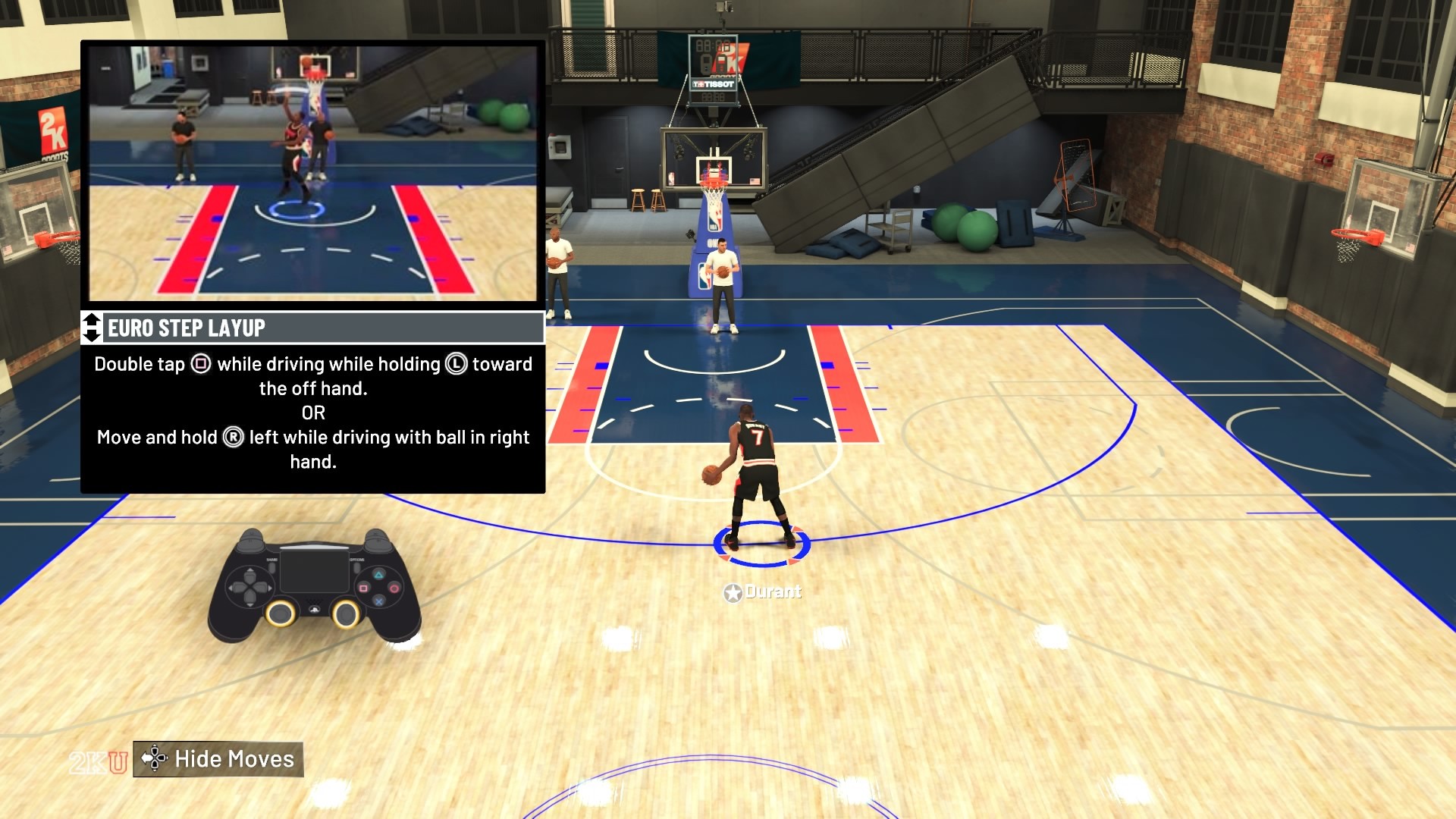 Double-tap Square while driving while holding the left stick toward the off-hand OR move and hold the Right Stick left while driving with the ball in the right hand.

The euro step layup is a great way to juke defenders and score. Condition your opponent to expect straight drives with a few consecutive layups, then mix in a euro step layup for a free basket. 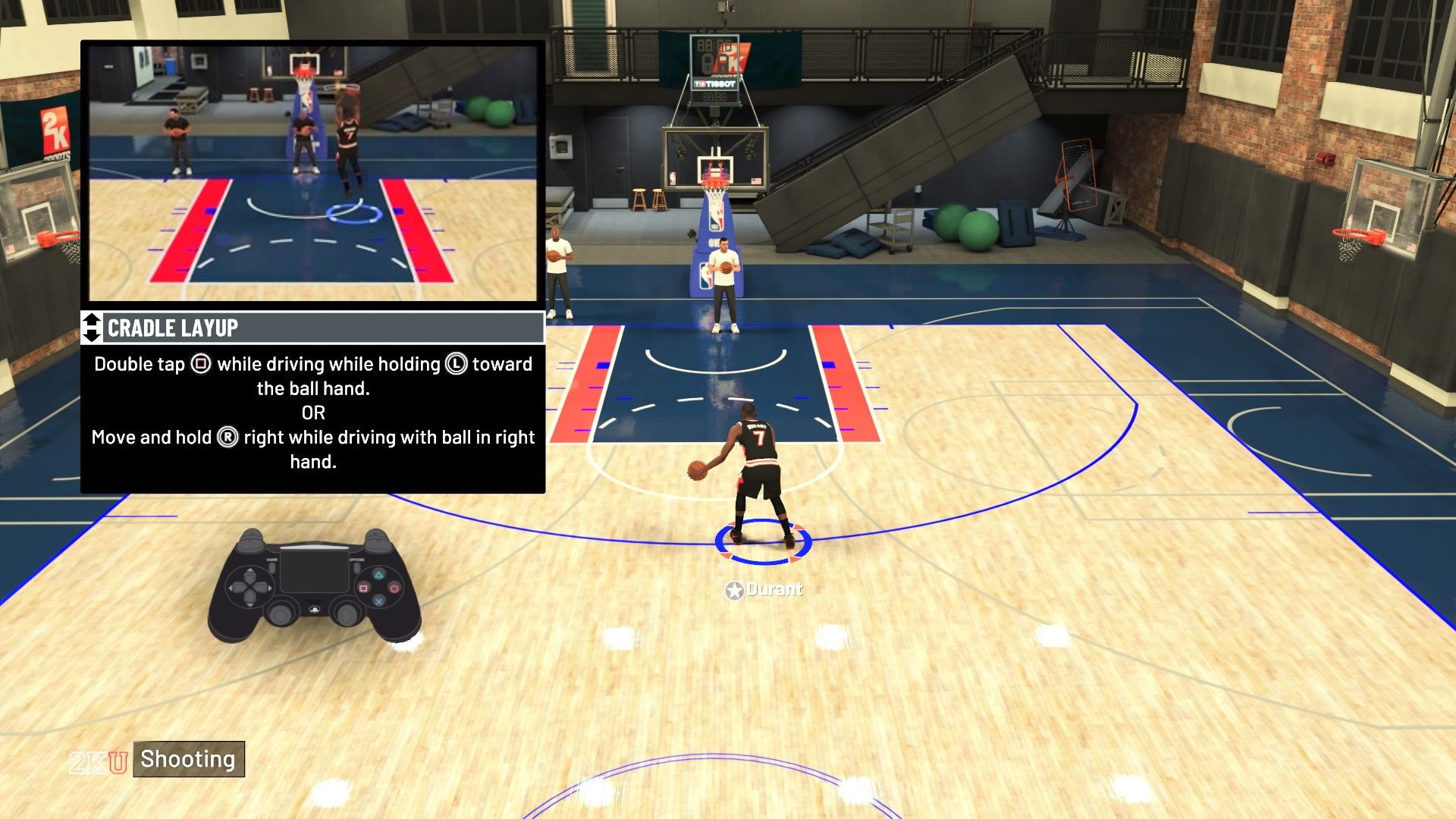 The cradle layup is another option to vary your offense and trick defenders. Remember to keep opponents guessing when it comes to the approach. You have no reason to switch strategies if cradle layups consistently work, although you’ll often face players that adapt. That means remaining unpredictable via different shots, layups, and even dunks. 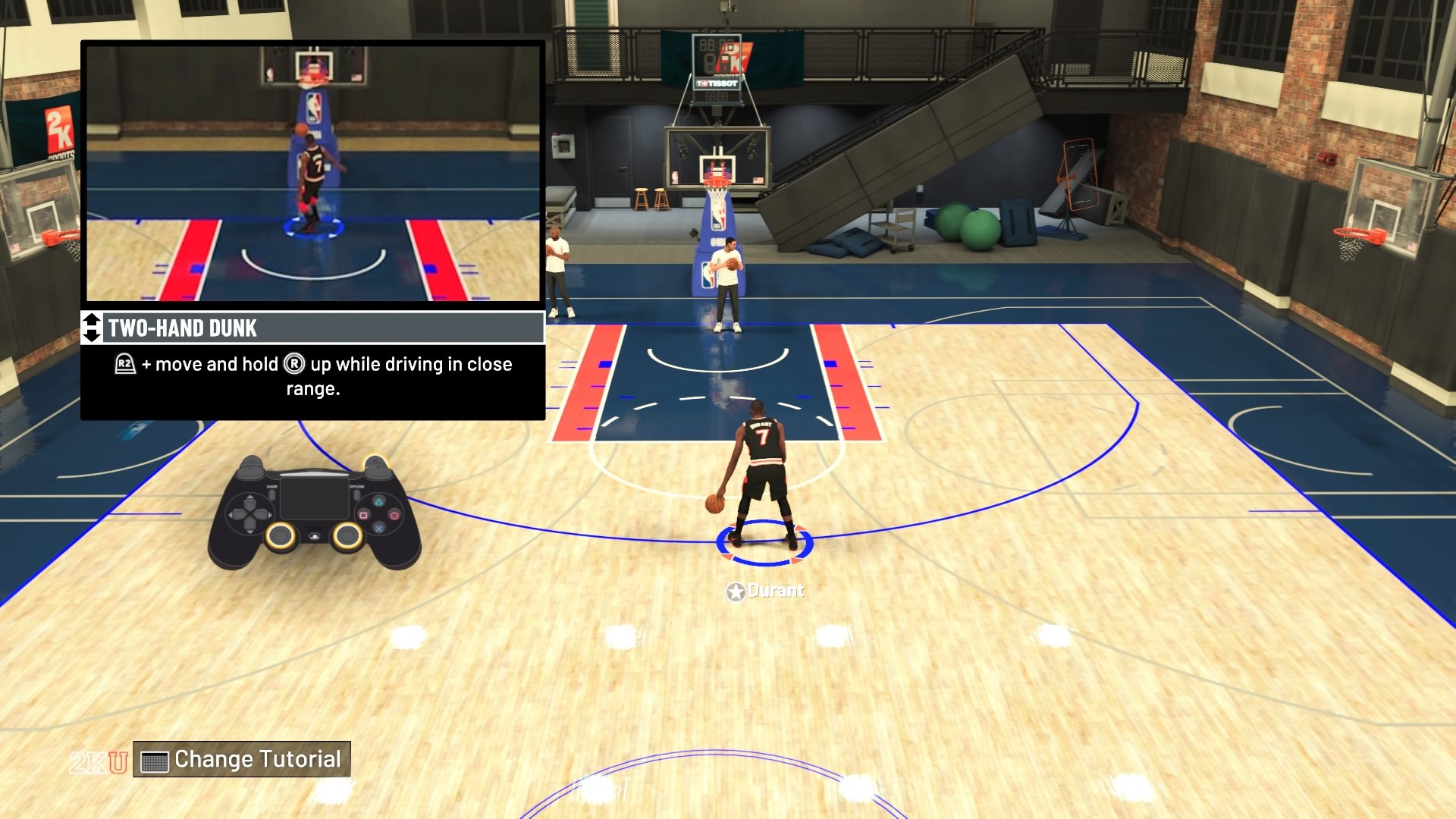 R2 + move and hold Right Stick up while driving in close range.

There’s no timing to secure two-hand dunks. Simply press the inputs and slam the rock. You can two-hand dunk from just behind the solid semicircle in the paint. Try to dunk from farther out and you’ll perform a layup. 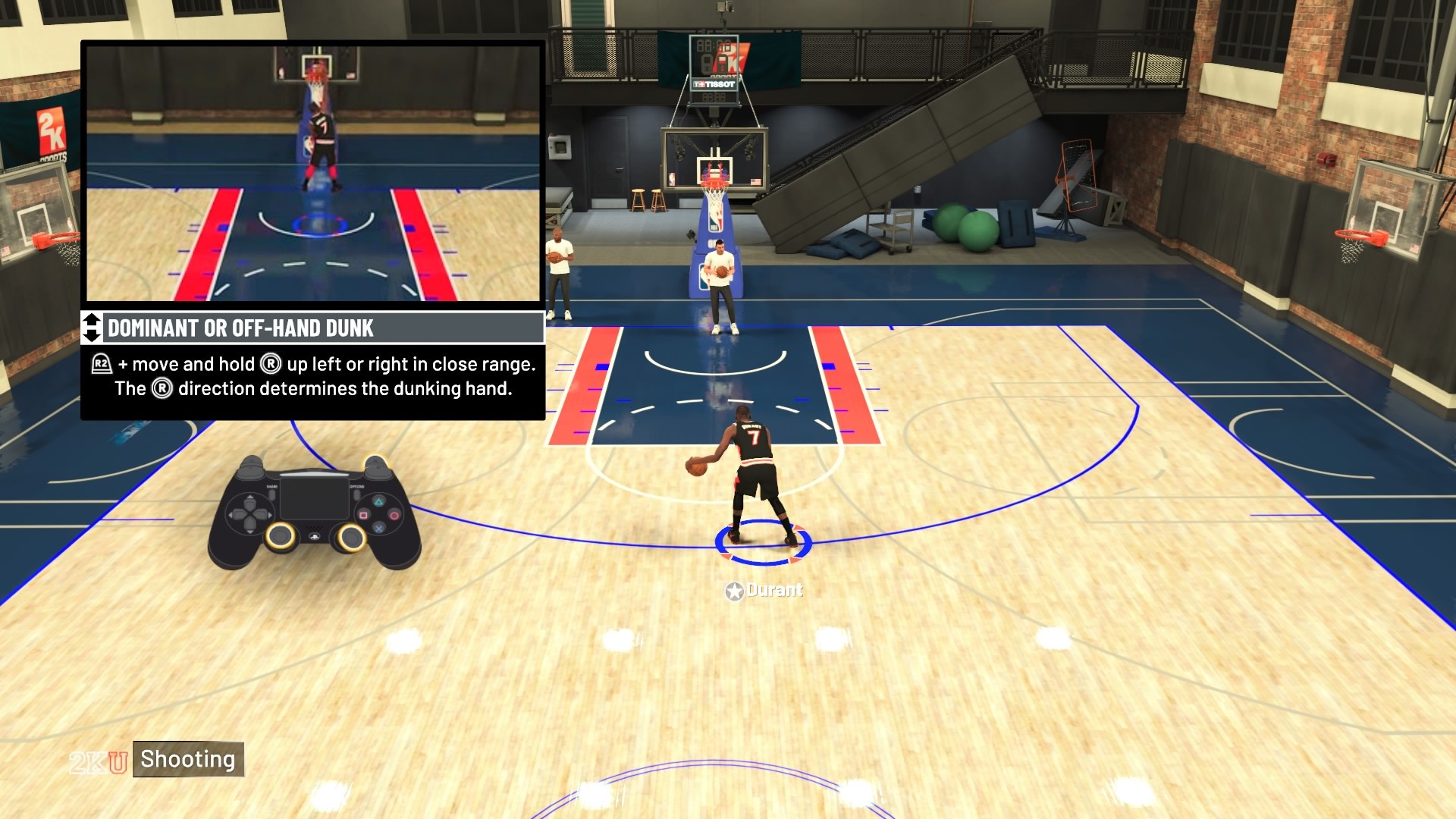 Dominant and off-hand dunks work just like two-hand ones outside pushing the Right Stick left or right and approaching the basket from a slightly different direction. Dunking with one hand can give you the angle you need to get around defenders when driving to the hoop. Every type of dunk has the same range. 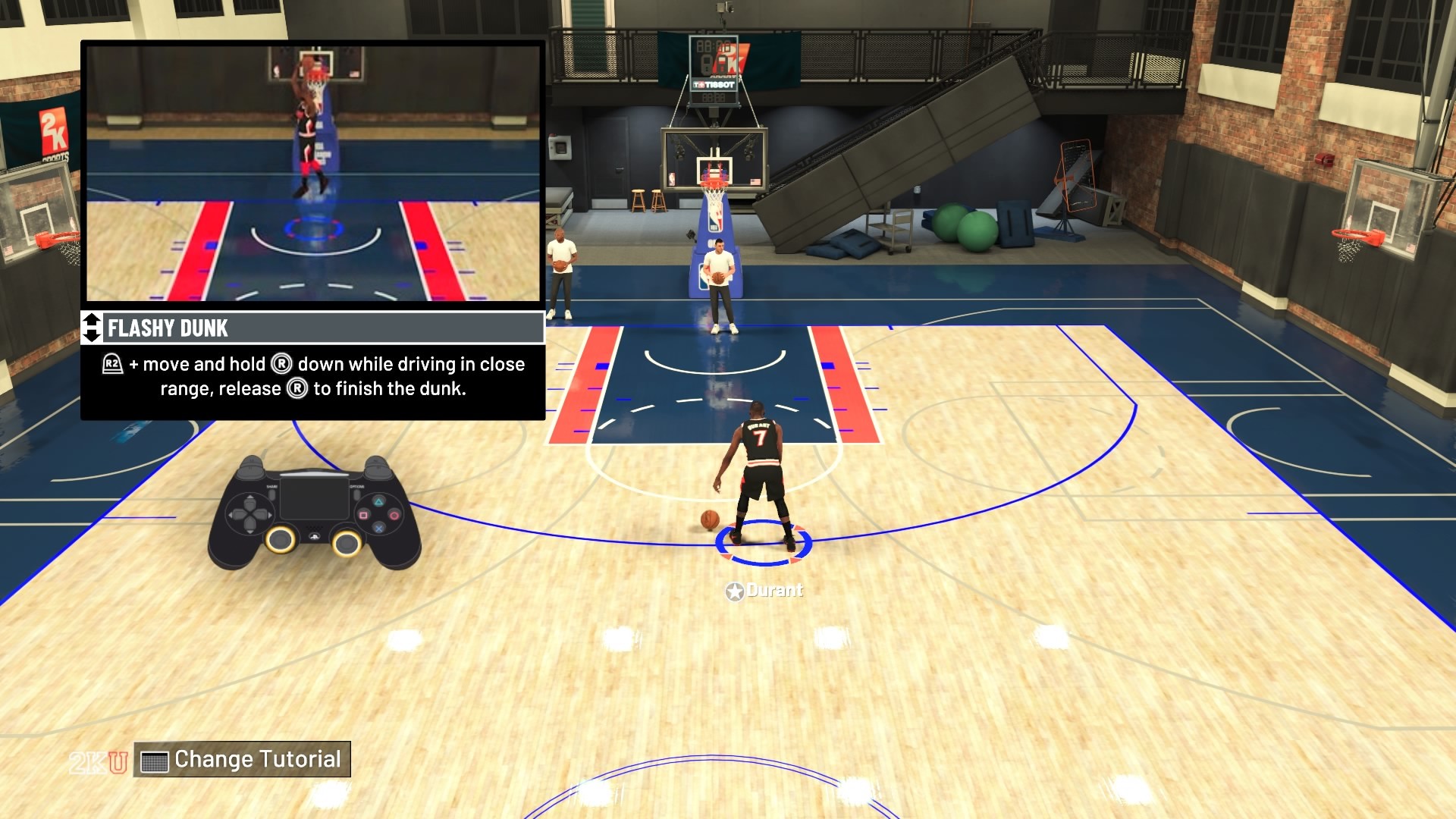 Nothing makes a statement like a flashy dunk. It’s easy to accidentally perform a different dunk, although you can’t complain too much because a point is a point. It’s possible to trick opponents into thinking you’re going one way and then go the other with flashy dunks. However, the style is likely the main reason you’ll whip this move out. 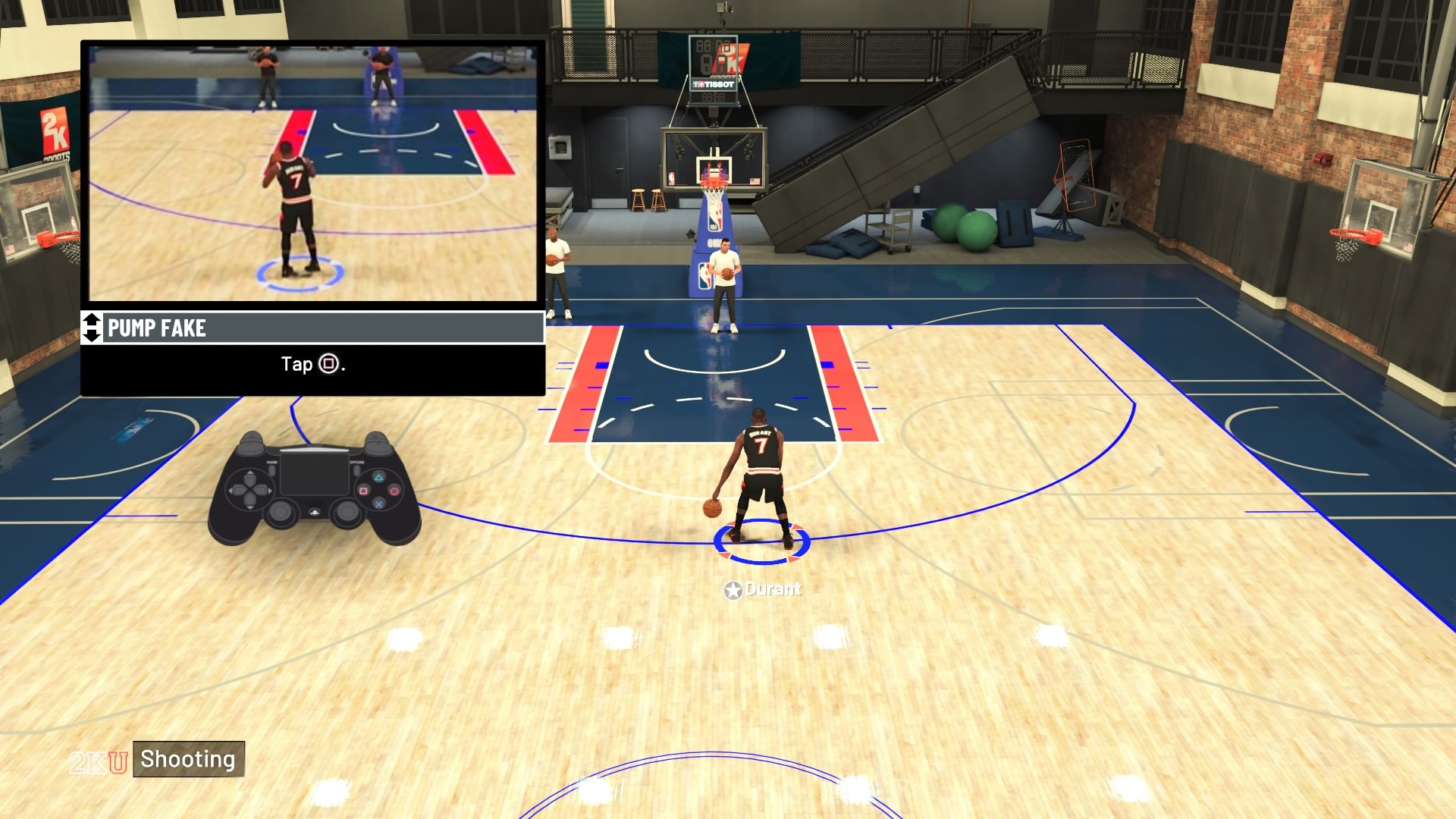 Simple, but effective. Bait defenders into jumping and drive into the paint or draw multiple players to you and pass to an open player for an easy basket. Pump fakes are one of the many mind games on the basketball court. Go for it too often and it’ll quickly lose any impact on the opponent. Mix up the timing and frequency of your pump fakes to avoid falling into predictable patterns. 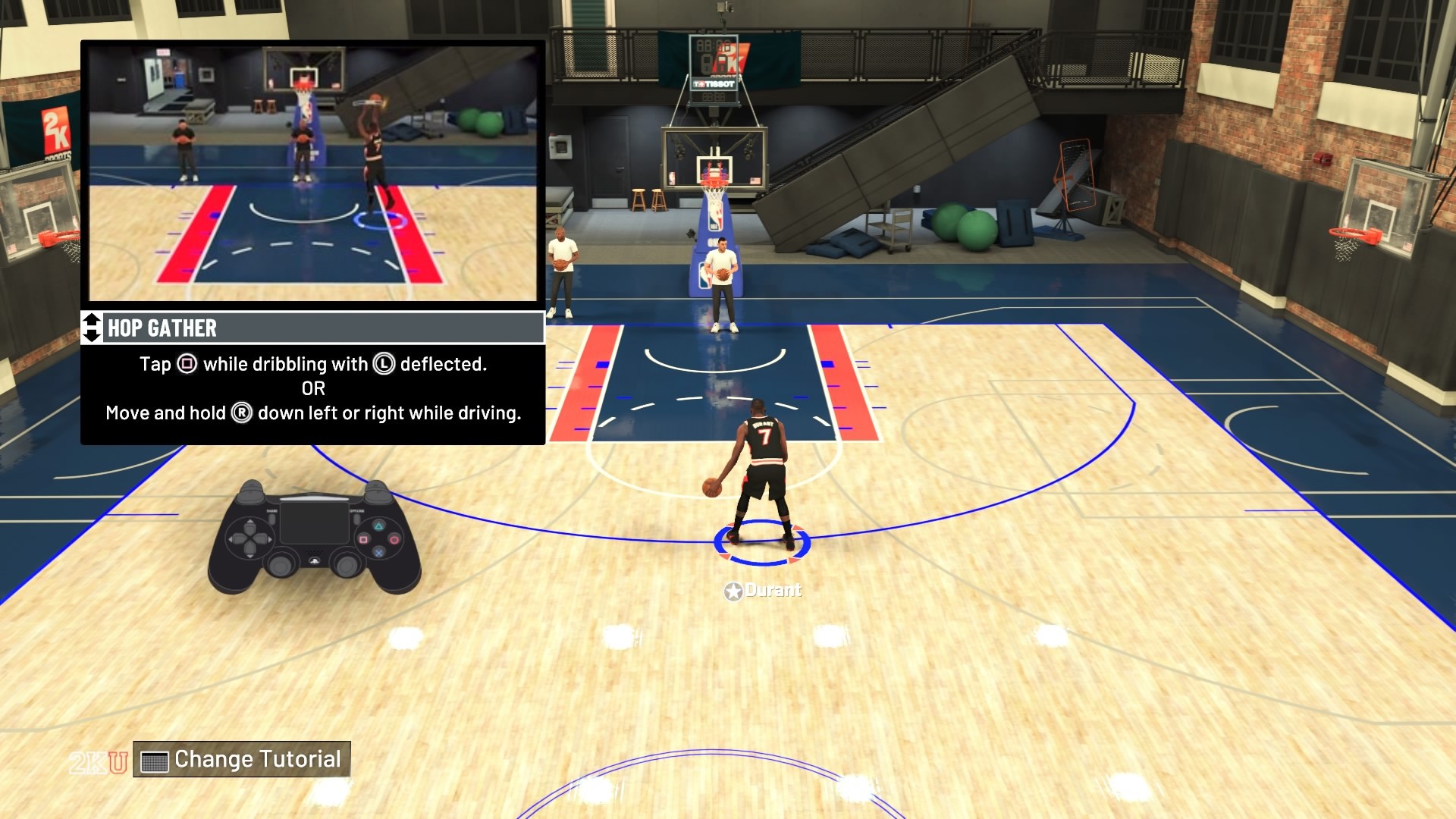 Tap Square while dribbling with the Left Stick deflected OR move and hold the Right Stick down left or right while driving.

Think of the hop gather like a more commital cross over. Switch between jump shots and hop gathers to create space for easier shots. You might even break the defense’s formation, opening up another teammate to take it to the hoop. Use in tandem with pump fakes and your opponent will really need to stop and think to thwart your offense. 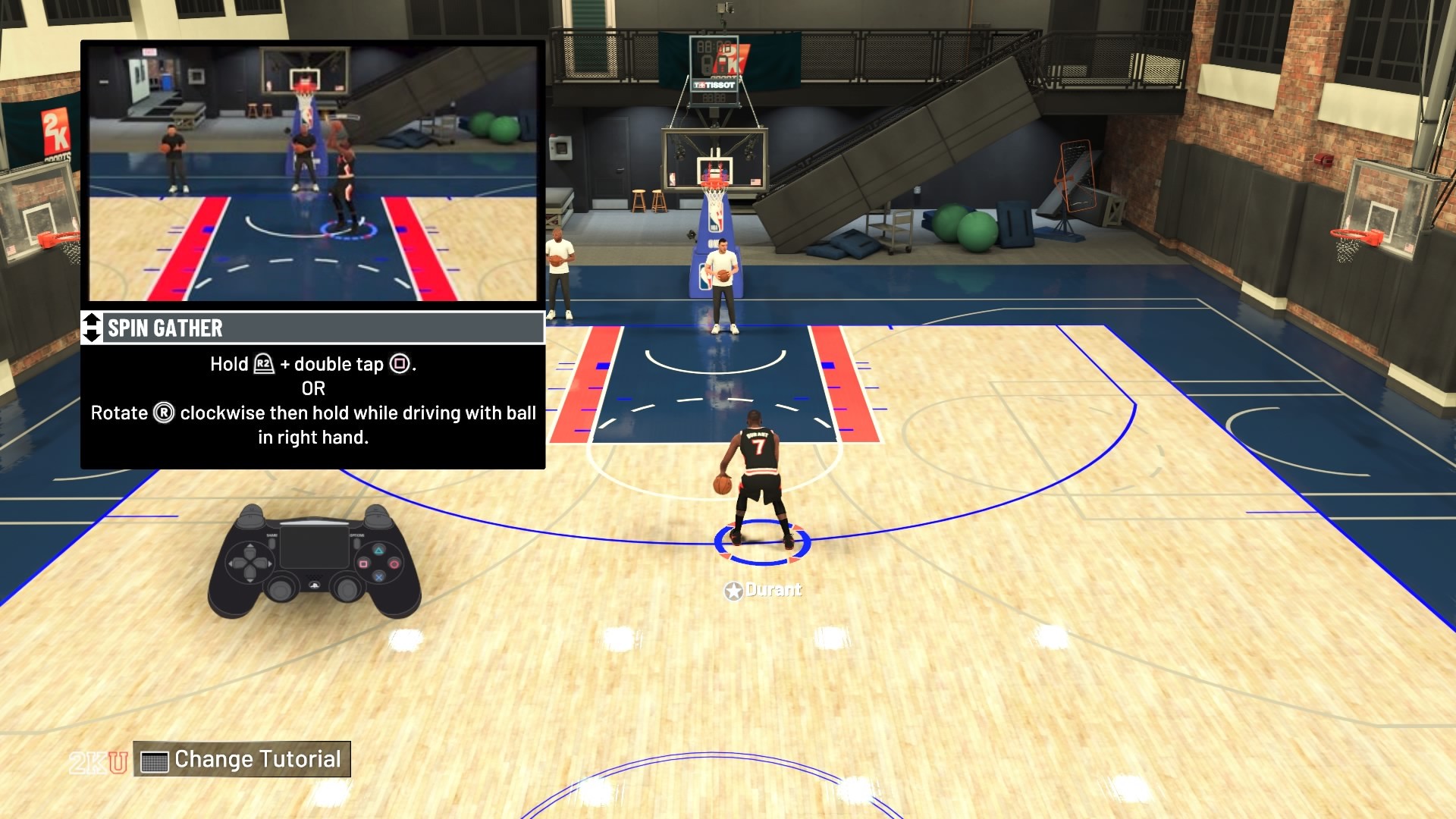 Hold R2 + double tap Square OR rotate the Right Stick clockwise then hold while driving with ball in right hand.

Dribbling underneath the hoop is an advantageous position because you can layup, dunk, or pass in a variety of ways, making it hard for the defense to anticipate your next move. The spin gather jukes defenders and puts users in the position for an easy point. Properly time your shot after performing one and remember that you can only stand in the paint for a few seconds on offense. 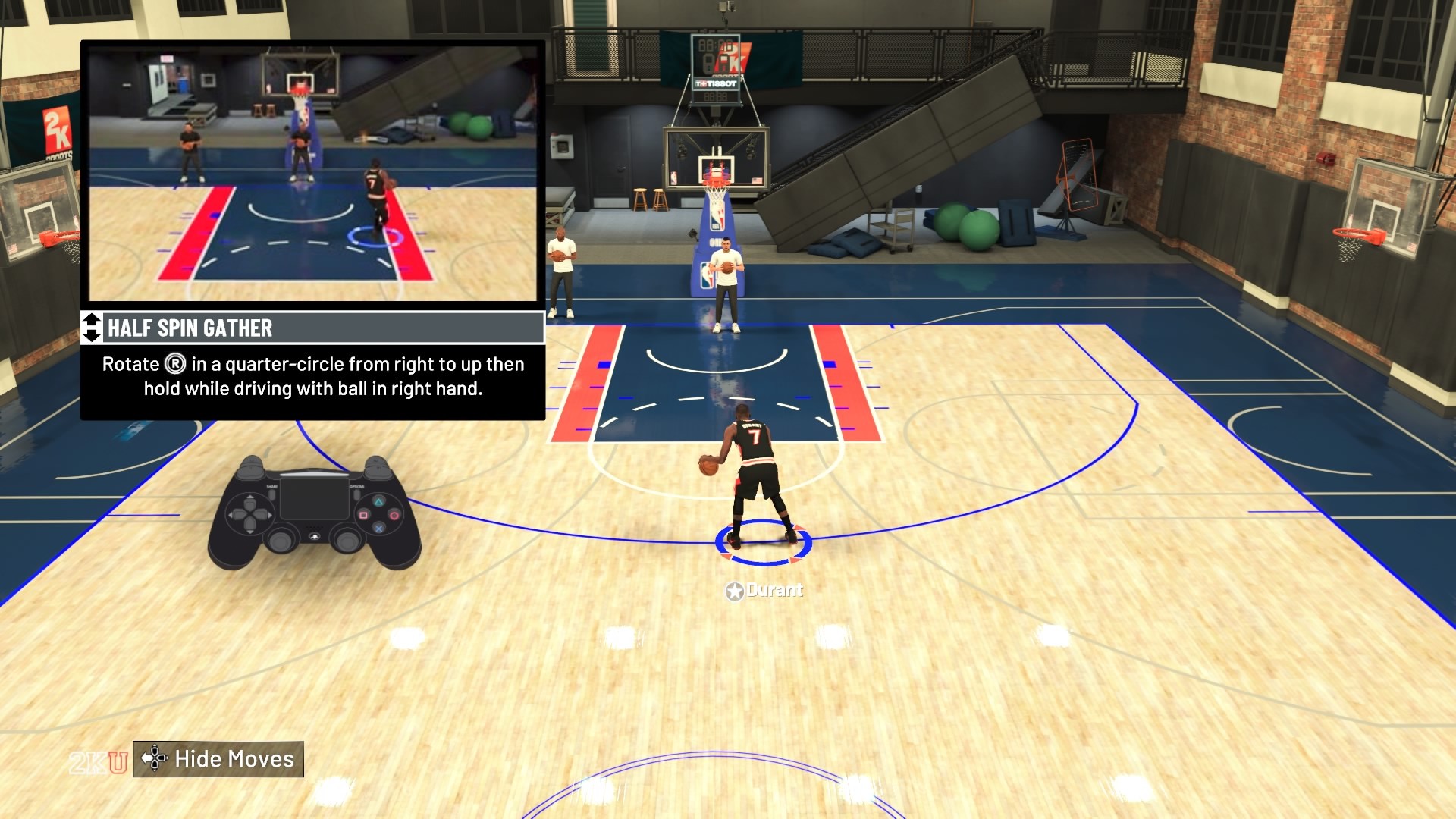 Rotate the Right Stick in a quarter-circle from right to up then hold while driving with ball in right hand.

The half spin gather is another evasive technique to dodge defenders for open shots. Convince competitors that you’re turning around, then continue in your initial direction. 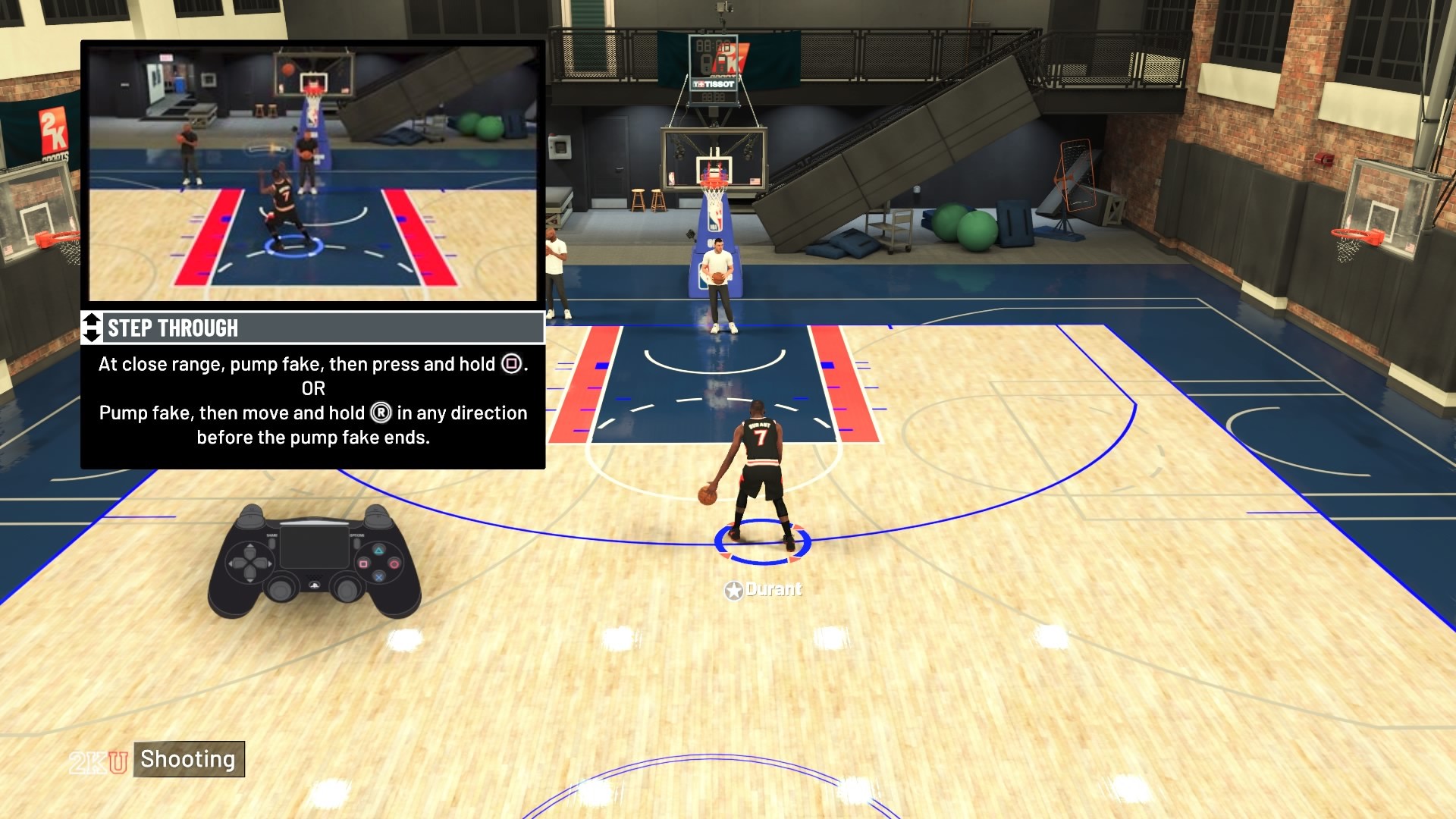 The step through is literally a step around a defender. Follow with a pass under pressure or shoot if you created enough space.

Practice and play smart. Keep up an erratic pace of switching between techniques like pump fakes and hop gathers to get into the other player’s head and the basket.