The single-elimination bracket featured the top 64 players from June’s four Open Qualifiers. Broadcast regulars might recognize prior Weekly Invitational champions in the bracket. The Monthly Final continued Europe’s trend of crowning a new winner every tournament. 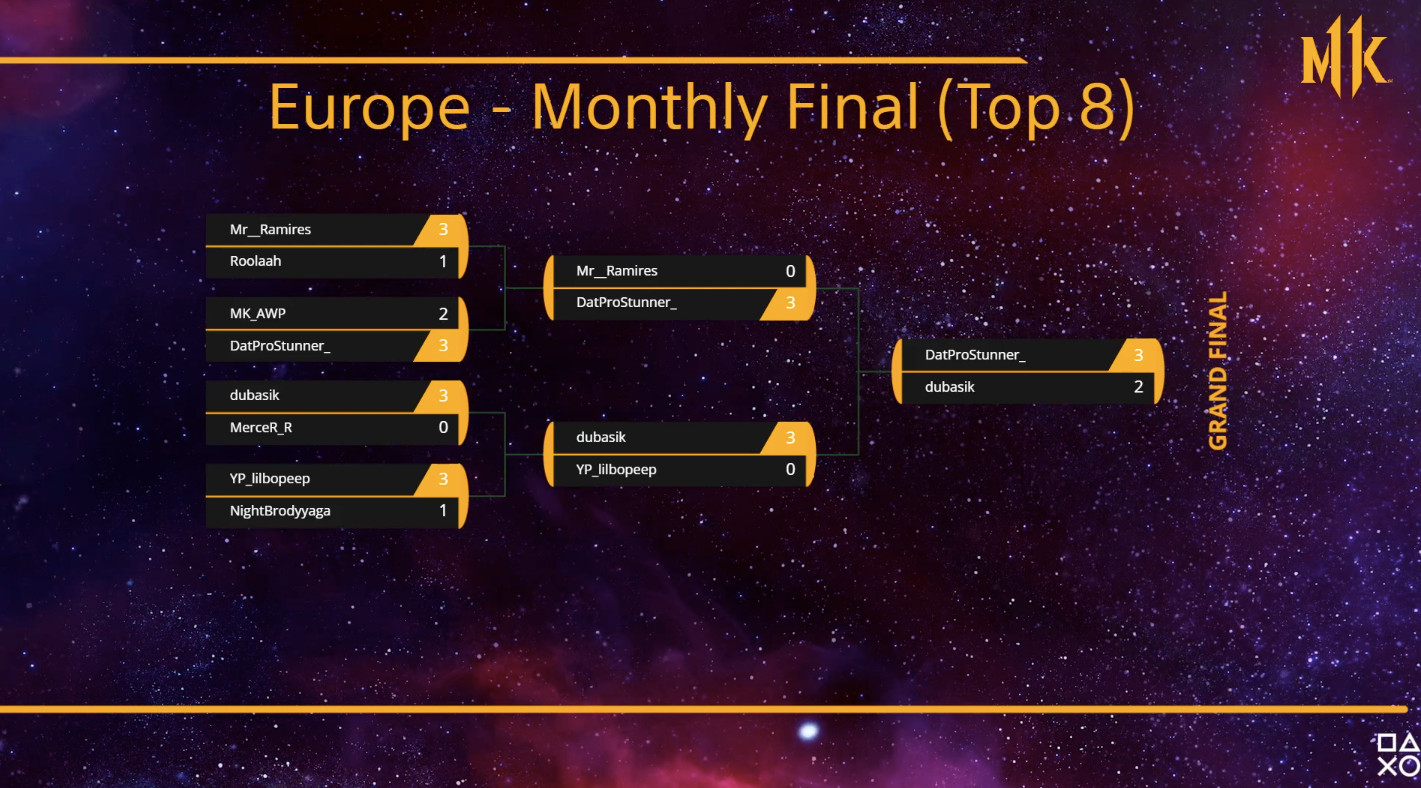 Fast-paced plays made this the shortest Open Series broadcast yet.

Round 1 ended with just a sliver of health left for Ramires, showing this set would be a test of attrition. Both players patiently poked and spaced to take the match all the way to the final round of game 5. The back and forth affair was filled with mixups involving interactables, hair grabs, and a barrage of bullets.

Ramires dropped the final combo, but still landed the decisive blow to advance, 3-2.

Dalphanate’s greatest challenge this set may have been himself.

His overcommitment allowed lilbopeep to come back with a Krushing Blow. The Raiden main then failed to pull the trigger on his Fatal Blow, costing him the first game.

Dalphanate proceeded to whiff a Thunder Wave counter poke, giving Bopeep a free combo at the start of the second. Dalphanate aggressively took the game with corner carries and electric combos, but proceeded to drop another Fatal Blow confirm to lose the next one.

Mustard called it the biggest scramble to end all scrambles because of how all over the place that last round was.

On the other end of the matchup, the Jacqui bread and butter juggles constantly kept Raiden in disadvantage. Raiden surged back round 2 with crazy corner pressure, mixing up Bopeep to land the overhead Krushing Blow and finish with the Fatal Blow for a convincing round.

All of the games went down to the wire, but Bopeep clutched them out more consistently to reach top 8.

Thunder and bullets were flying in the initial matchup, but both players held their own at any range throughout this swift set.

Rankz took game one with patient blocks, selective approaches, and unsafe options. NightBrodyaga fought back game 2 to level the playing field with hard punishes and callouts from across the stage thanks to Jacqui’s mobility.

The character switch to Baraka netted an early round, but the bruiser struggled to fully adapt to Upgraded’s strong mixups. Ketchup said Rankz might have taken the game if he waited a few more seconds instead of hastily overcommitting to options that he didn’t always optimize.

This was a spacing battle. Stay close and Stunner took over, but fall back and Sonya strode ahead.

Stunner steadily lost damage approaching, giving AWP an early lead out of the gate. However, Stunner used Marauder’s extra range to get in game 2 and grab victory by the claws. Stab, stab, stab.

If he wasn’t stabbing, Baraka was grabbing. His strong grab game mixed-up Sonya, although a whiffed Fatal Blow cost Stunner the round. AWP’s Energy Rings continued to decimate Stunner’s health and any chance the Baraka main had of winning.

Stunner ducked more and more Energy Rings as the match raged on, undermining AWP’s best tool and allowing Baraka to land Gutted. Sonya almost had the set, but Baraka bit her for the Krushing Blow comeback.

A few slices put Stunner in the lead game 5. AWP zoned him out to make it close, but the Krushing Blow in the corner skewered AWP out of the bracket, 3-2.

MerceR is known for strong fundamentals and risky tactics. The first of which was surprising Ketchup and Mustard with the Cetrion pick. Dubasik dominated game 1 with screams, banshees, cancels, and kartwheels, sending MerceR back to his signature Scorpion.

MerceR’s teleports made the second game closer, but dubasik was still one step ahead, anticipating a teleport cancel to knock out the famous fighter. MerceR’s reckless style came to life in game 3, comboing Sindel from both sides using chains and kicks, but dubasik didn’t stop yelling and the hair grabs kept coming.

Dubasik took his time approaching until MerceR did something like throw out the chain, which created an avenue for Sindel to close the gap. A loud victory secured dubasik a spot in semifinals, 3-0.

Stunner steadily approached while under fire, reminiscent of his previous set against AWP. Fortunately for the Baraka main, he was ready for more of the same. Ramires may have taken the first round, but after Baraka closed the distance it was all slashes.

Sheeva nearly landed the triple stomp Krushing Blow to come back, although it wasn’t even to stop Baraka from slicing and dicing another win.

Baraka’s grab and stab game never stopped game 3. Ramires’ Skarlet struggled to zone Baraka, who went on to cut a path into the semifinals, 3-0.

Outtake versus Royal Edenian gave both players ample resources to fight from afar.

Scream stuns and hair grab mixups made quick work of Johnny Cage. Game 1 was brutal, but Bopeep stuck with Cage. The pick didn’t pay off as Bopeep took too much damage from Low Star Screamers. Ketchup concluded dubasik and Bopeep must have played in the past because Bopeep refused to switch to his Jacqui, despite dominating the prior Invitational.

Dubasik anti-aired Bopeep many times and baited the Fatal Blow with an orb to get ahead game 3. Scream Krushing Blows, more hair grabs, and Low Star Screamers ended the set. Dubasik had no need to change his strategy because everything worked so well.

That marked two straight sweeps for dubasik heading into the grand finals.

This was one of the tensest Open Series sets yet and felt like it could go either way at any moment.

Dubasik pulled out Emerald Defender Jade specifically for the matchup. He landed a stage interaction into back-to-back Krushing Blows to take the first game, then continued to prosper. Emerald Defender’s side switching Nitro Kick helped dubasik escape from the corner and out of Baraka’s clutches, but Stunner failed to escape a number of throws, leading to a ton of damage and the loss.

Stunner had the momentum and confidence going into game 3 despite the tie score. However, dubasik adapted with projectiles and pokes from a safe distance. Both players patiently blocked once Stunner got in, although everything seemed to work for the Baraka main. One attack seamlessly flowed into the next.

Dubasik switched to Sindel with his tournament life on the line. Baraka backed him into the corner, capitalizing on scream blocks where other players could not to deal a swift 60%, but an empty jump cost him an expensive Krushing Blow round.

Both players played footsies for fear of giving the other the advantage. Time was counting down and Stunner choked. He had the round, then got hit by dubasik’s scream, which was likely the only move dubasik could land to win.

Sindel zoned Baraka with banshees and screams game 5. Dubasik was about to finish off Stunner in the second round, however, the Baraka main said otherwise and got the grab to win with virtually no health left. Baraka approached only for Sindel to kartwheel him away in the final round. Stunner rinsed and repeated grabs to narrowly take home the title of Europe’s first Monthly Final Champion!

Step up to the global stage in next month’s Mortal Kombat 11 Open Series and look forward to more nail-biting sets on the Competition Center.