The Italian player’s ability to consistently make the first goal throughout the tournament was a testament to Richard’s advice. Richard said players need to immediately make changes if their opponent scores the first goal because of the game’s short length. Dagui was never down so he didn't have to make changes.

Tactical precision was extra important because strong defense and low scores were prevalent during this Monthly Final. 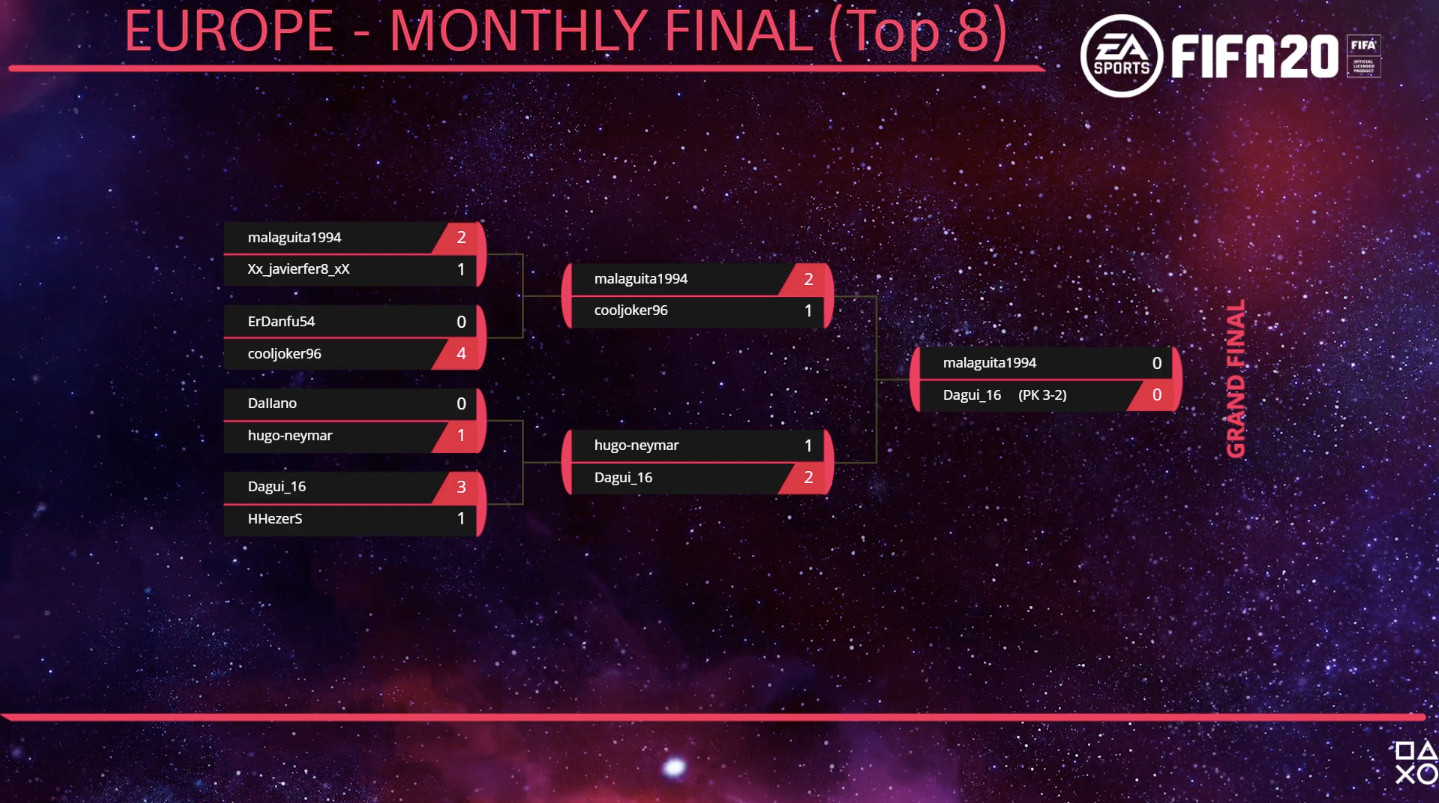 The single-elimination bracket featured the top 64 players from June’s four Open Qualifiers. None of the Weekly Invitational winners reached the top 8, meaning Europe crowned a new winner every tournament.

Last week’s champion stormed onto the pitch, but was blown out of the bracket by Open Series Weekly Invitational veteran Dallano. Early in the game, Dallano used Jafonso’s offsides trap to his advantage, scoring through a scattered and open defense.

A dragback from Dallano put the underdog ahead 2-0 before the half. Jafonso found the corner to show some signs of life with 25 minutes left, but Mbabpe scored on an open goal after Dallano baited the goalie away to cement the victory 3-1.

Jumping into the match at the 20-minute mark, Murt made a mistake. He passed to Dagui in his own box, handing Dagui the ball and the lead. Murt only had 33% possession, but still held Dagui to only one goal in the first half. Murt nearly got the equalizer before Dagui stopped him in the box with a steal. Murt’s offense continued to turn around as the game progressed, getting closer to scoring thanks to more possession.

Fortunately for Dagui, his goalie made a clutch save to keep Murt off the scoreboard. Dagui, known for his strong offense, continued to snag Murt’s chances of going into overtime to advance 1-0.

Richard said Swedish players are thriving in the online environment, but ez4MeL did not continue that trend against cooljoker.

MeL scored 7 goals without giving up any his past two games. His eighth came 24 minutes into the game with a juke past a defender and a quick shot in the box. The Swede patiently passed into the box and waited, despite defenders approaching from all sides, before tapping in his second goal of the game.

Cooljoker scored a near-post goal after a chain of consecutive passes, then crossed the goalie soon after to tie. MeL’s defense looked like it was falling apart as cooljoker continued to take shot after shot. MeL’s offense failed to score despite hitting the post. Meanwhile, Griezmen, fresh off the bench, led a last-minute attack that couldn’t stop cooljoker from taking the game to OT. Neither player was fazed in extra time, bringing the stalemate all the way to penalty kicks.

Hot off his Top 16 win, cooljoker’s quarterfinals performance was no laughing matter. Starting from the corner, he passed upfield, then back to the top of the box for a quick turn around shot. The lead only continued to grow throughout the game.

Danfu struggled to shoot, while cooljoker drove in three more goals for a commanding 4-0 victory.

Both players scored few goals throughout the tournament, making this a match of attrition. Defense dominated the first half until Dagui scored in the final seconds, patiently passing as if there was more time on the clock. His final combination to finish was a pass to the top of the box followed by a sprint across the goal and a passback for the near post point.

The second half was more of the same thanks to solid defense. Hugo missed the equalizer off the post, prompting a formation change into a 4-2-2-2 and a number of position and spacing adjustments. His first offense after the timeouts paid off with Mbappe’s dink into the back of net.

There was deja vu at the end of the match. Dagui passed the ball from the box back to his teammates to return the ball to the side of the field and finish at the last possible moment to move on to the Grand Final.

This was the first appearance of a team other than France during the Monthly Final and it wouldn’t be their last. Liverpool proved their worth with a shot past the goalie and straight into the corner. Determined to keep this more competitive than the previous games where only one player scored, Cooljoker passed the ball around the box, and the defenders, for the equalizer at the 69-minute mark.

Despite his tricky maneuvers, Joker lost in what Richard called, “the harshest way possible,” trying to clear the ball only to pass it to the other team in the box for an easy goal.

Players from Spain and Italy took the pitch for the grand final. Twitch chat predicted Dagui from Italy would take home the title. After 45 minutes the outcome was still unclear. Neither team could control the match nor give the other too much room to work with. Whenever someone got close to the goal, a header, steal, or clear kick was imminent.

The tight match went to extra time with hardly any change in pace. Malaguita made some changes during halftime in OT, although you wouldn’t know based on Liverpool’s static performance. Another scoreless period sent both players to the line.

The nail-biting penalty kicks were mostly shot for shot, coming down to the final round. Dagui scored the last shot to become Europe’s June Monthly Final Champion.

Think you’re better than those on stream or simply want to step up your game? Join July’s FIFA 20 Open Series to close in on the competition.