Cisse, who originally appeared on Twitch chat to support his brother KingCJ0 in a Weekly Invitational, entered the Open Series and won against his brother. Mexican competitor MicroNacho didn’t have much time in the limelight but climbed to the top of the bracket nonetheless.

This wasn’t the first upset. FIFA 20 Open Series broadcasts are a mixed bag of new names, FUT verified players, and eMLS pros--including this one. 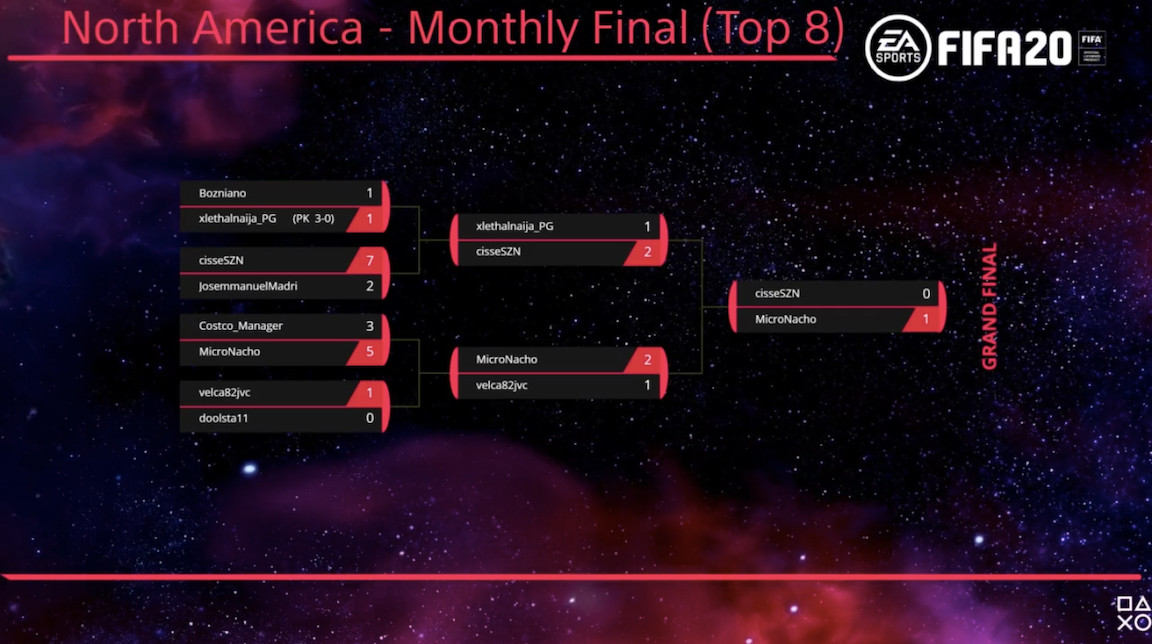 The top 8 players from each of the four North America qualifiers competed in a single-elimination 64 player bracket for the title of FIFA 20 Open Series Monthly Final champion.

Despite what his name might suggest, realmadrid4789 didn’t play Real Madrid. Both competitors played France.

Cisse built momentum with the first goal. Realmadrid’s goalie blocked the shot, but the ball bounced into the net from the impact. Later, realmadrid messed up a tackle that gave Cisse a penalty kick. He smashed the ball down the middle of the goal to pad his lead.

Realmadrid only started scoring after halftime. Mbappe rushed downfield and passed to Coman for a clean kick into the net. Lloris blocked realmadrid’s next attempt, but failed to fend off realmadrid on the rebound for the equalizer.

Cisse scored the winning goal with some twists and turns, kicking the ball into the corner of the net.

Both competitors chose Liverpool. Richard mentioned KingCJ0’s role in legitimizing Liverpool’s utility, which likely contributed to the team’s emergence in the North America Open Series meta. Beuses overcame KingCJ in the latest Weekly Invitational bracket with this team, but could he defeat another eMLS player?

Young-H- slotted the ball past the goalkeeper in the first 8 minutes. Then, he dribbled to make room for a second goal. After halftime, Young-H- scored his third with a ball roll at a far angle to seal the win. Beuses fiddled with settings and tried a few shots but couldn’t break through Young-H-’s defense.

Two eMLS pros, two brothers. Cisse and KingCJ0 even live in the same house! KingCJ0 was the favorite to win based on his Open Series record and recent performances, but the Open Series showed that all data can be thrown out the window in one game.

Cisse shot the first goal after a fake in the 23rd minute. Not long after, he flicked the ball in the net for a second. KingCJ fought to catch up in the first half.

Cisse seemed unstoppable by the third goal. Then, the switch flipped for KingCJ0 and he replied with his own goal to up the score. In the 89th minute, he made a second!

However, with such little time left, KingCJ0 couldn’t even the score. Cisse won the battle of the brothers to advance in the bracket.

Bozniano and xlethalnaija_PG are FUT verified FIFA Open Series regulars. Both of them were winners on paper, even though Bozniano appeared in two Grand Finals while Lethalnaija usually lost before then.

Bozniano scored the first goal off a cutback. Lethalnaija replied with a goal from Yedder. After those two goals in the first half, the two competitors struggled to break the tie. Even after fiddling with positions, both of their defenses seemed to stone wall the other. Possession was a game of tug of war. Bozniano struck a foul in the 82nd minute, which gave Lethalnaija a chance to take advantage of the close proximity to the goal, but no dice.

They pushed into overtime without any further breakthroughs, leading to a penalty kick shootout. Bozniano failed to make the first three shots while Lethalnaija succeeded, earning his place in the semifinals.

After defeating his brother in the Round of 16 match, Cisse went on to dominate his next opponent josemmanuelMadri 7-2. Lethalnaija may have just overcome a Weekly Invitational winner, but would the underdog mentality pull him through?

Cisse scored with Yedder. Still, Lethalnaija kept his composure. He faked a shot, then slotted the ball past the goalkeeper! Both players had yet to score another goal by the 90-minute mark. Just as they were about to settle with a golden goal, the broadcast moved onto the next semifinal.

Cisse later moved on to the Grand Final.

Barcelona took the field for the first time in a FIFA 20 Open Series broadcast as MicroNacho’s pick. MicroNacho recently beat CostcoManager in a penalty kick shootout in the quarterfinals. After beating eMLS pros doolsta11 and Young-H- earlier in the bracket, FUT verified player Velca82jvc became the favorite going into this match.

Because the match was already ongoing, the broadcast started from when MicroNacho was leading 0-1. MicroNacho timed Messi’s advance to score at the perfect moment. Velca dribbled past defenders and passed the ball to Yedder to answer back with a goal. However, he couldn’t catch up by the 90-minute mark.

MicroNacho advanced to the Grand Final.

Cisse had a resume advantage on MicroNacho. However, with his recent victory over Velca, the underdog proved that he could win against eMLS-level players. Richard pointed out that Messi, one of the strongest players in the game, could be the key to defeating France.

Both teams bullied each other for the ball and blocked every attempt to score, remaining deadlocked through the half. Cisse shot the ball into the net, but it was offside. Lloris deflected otherwise surefire shots from Messi.

MicroNacho’s close control with quick touches and patient passes created a path to score. Another offside play plagued Cisse toward the end of the match. Both teams tried to tackle the ball at once but couldn’t squeeze anything more out of the remaining time.

MicroNacho seized the Monthly Final victory with his only goal.